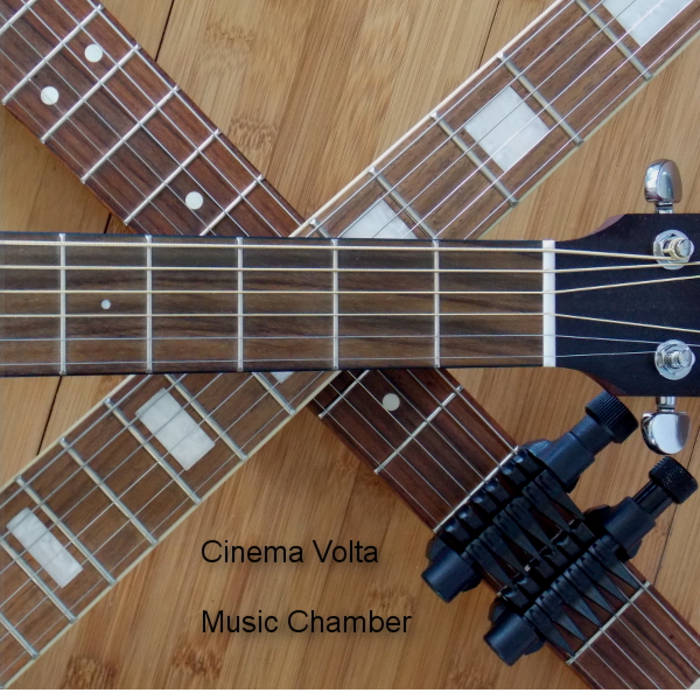 Music Chamber is a collection of ambient solo guitar pieces, each with the title, "And Flights of Angels Sing Thee To Thy Rest."

They are very simple pieces, each in an open tuning, and all of them played into a huge reverb. The combination of the overtones created by the open, ringing strings and the dense acoustics of the massive chamber creates surprising spectral effects - the sounds of distant voices, flutes, and other instruments seem to materialise like a hallucination or something half-remembered from a dream.

You can find live versions of these pieces on the album, "Live from Broompark," at cinemavolta.bandcamp.com/album/live-from-broompark

The last of the three pieces was the first written, and was responsible for the title of all three. I was asked to perform in a memorial concert for my old friend, the musician David Gamper, at Roulette in NYC in 2012. It took me a long time to write the piece - it was important for me to create something that expressed both my sadness at his passing and what an incredible influence he had been on me, both musically and personally.

There are a range of other influences that come into play in these tracks as well. The tunings are pretty much standard blues open tunings and the fact that there are no chord changes comes directly from musicians like John Lee Hooker and James Brown.

Other influences on the piece were the works of Charlemagne Palestine, Rhys Chatham, Alvin Lucier, Robert Fripp, Brian Eno, Glen Branca, and many others.

And for the guitarists:

Part 1 is in open D on my Stratocaster, using two Spider capos.

Part 2 is in open E on my Yamaha acoustic, also using the Spider capos.

Part 3 is tuned directly to open A on my Les Paul.

All tracks written, produced, and performed by John Maxwell Hobbs

For much of the ’90s he was the Producing Director of The Kitchen in New York where he produced the work of Philip Glass, DJ Spooky, David Hykes and many others. ... more

Bandcamp Daily  your guide to the world of Bandcamp

Interviews With Butcher Brown and Slauson Malone, plus LP of the week by SAULT.